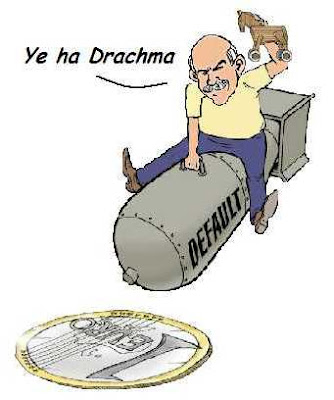 To the complete surprise of virtually everybody, including his own parliamentarians, Greek prime minister George Papandreou has dropped a complete bombshell, calling a referendum to approve the latest EU bailout deal.

According to the Reuters report, Papandreou says he needs wider political support for the fiscal measures and structural reforms, upon which the bailout is conditional.

This is an explanation that does little to dampen speculation as to his real motives – the presumption being that the referendum must be lost. Media sources are already asking whether this is political suicide, although Papandreou seems to be playing a canny game.

He already has a confidence vote in parliament on Thursday or Friday and if he was after an abrupt end to his political career, he could have gone down without making a fight of it. The referendum announcement, therefore, looks like he wants to go down fighting.

Furthermore, this may not be as much of a gamble as might appear. An opinion poll conducted by Kapa Research SA records sentiment finely divided. While some 58.9 percent consider the bailout package has "negative" or "probably negative" implications, 50.1 percent agreed with the need for more European oversight.

Bizarrely, only 48.8 percent see the bailout as an infringement of national sovereignty and 72.5 of the respondents said they wanted Greece to remain in the eurozone.

Rumours from Athens are that the referendum is likely in mid-January, giving plenty of time for negotiations in les couloirs, once Merkel and the "colleagues" in Brussels have got over the shock – they having been kept out of the loop as well.

Meanwhile, some parliamentarians are questioning the referendum's legality under the constitution, which does not allow referendums on economic issues but only matters "of great national importance". The last referendum was in December 1974, on abolishing the monarchy - held shortly after the collapse of a military dictatorship.

Fotis Kouvelis, leader of the small Democratic Left party argues that, instead of a referendum, the country must go to early elections. It's the most honourable solution, he says. But with no party likely to win a clear lead, Papandreou might be gambling on the referendum giving him a new legitimacy, which will extend beyond the January and well into the next year.

But there is one issue – perhaps the elephant in the room – which is not being mentioned: the attitude of the Army. With a possibility of a military coup not being ruled out, we do not know who is pulling the strings.

For one brief moment though, we have a delicious certainty of knowing who isn't. And even now, such has been the shock that we have not yet had a comment from either Berlin or Brussels.