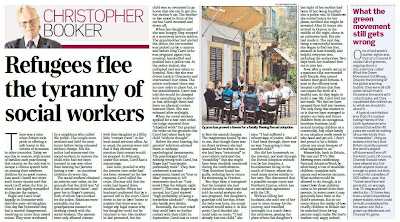 If you weren't already in a blind fury, and you haven't already done so, read Booker. Then read how "top British charities" are giving money to Muslim fundamentalists. Enjoy the prospect of the NHS paying for five star hotel rooms, note how Westminster is to spend £2 million on traffic wardens, while cutting other "services", and how we must all dig deep for a few gifts for our masters - a mere €40,000-worth.

Then see how, by a convoluted process, our wet as ditchwater policy on pirates could mess up our energy supplies, even as they get a $9.5m record ransom. Still, if you want piracy, watch the feed-in tariff is, as expected, turning solar panels into a new gold rush that threatens to ruin our countryside ... and make millions for the Germans and Chinese – to say nothing of farmers. Somali thugs are small beer in comparison.

We can certainly reflect that they are amateurs compared with this lot, the "world leaders" who are looking to carbon taxes to fund fight against climate change. International travel and "carbon intensive goods" like petrol cars could all be taxed under new plans to raise £60 ($100) billion every year to help the "poor world" cope with global warming.

If that doesn't worry you, think about the way the EU is "helping us" with the de-industrialisation of Britain or the way that MPs are still on the take. On the other hand, seeing the Mayor of Stockport being arrested in a "benefits fraud" is, I suppose, just a sign of the times. I wonder what happened to him. And needless to say, we do love being told by the multi-cult, left wing Rowntree Foundation that we whites "must do more to help Muslims feel at home". 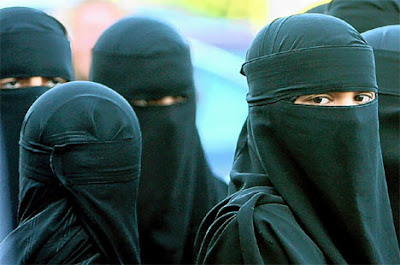 Nor can we gain any comfort from the idea that the government of the land is in good hands. With the Coulson debacle continuing, more than a few are questioning Cameron's judgement. Only an idiot could hire the former boss of phone hacking journos for a communications director.

And talking of a failure of communication, when the climate change horse is not only dead, its flesh rotted and its bones bleached white by the chill winds of global cooling, the warmists are still intent on giving it a good flogging in a last, desperate attempt to revive it. 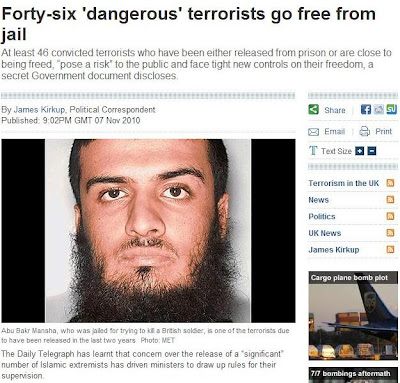 And, while Council Tax defaulters and BBC license defaulters still regularly get sent down, the state is planning to ensure that at least 46 convicted terrorists will be freed from jail, despite being judged to "pose a risk" to the public. Clearly, it is better to conspire to murder fellow citizens than to fail to pay the state what it believes is its due.

Of course, at the behest of the foreign judges who increasingly rule our lives, we must continue paying benefits to the spouses of terrorists who have had their assets seized. The consorts of murderers must thus be protected, and we are required to pay whether we agree or not. Equally, thieves and vagabonds must be treated better than their victims - the dwindling few who actually find themselves incarcerated.

Needless to say, you will hardly get a better class of justice elsewhere, not that we are given a chance under the European Arrest Warrant. Pick up any others you like from this year and we can do a compilation: "Britain 2010".  Send the links to my e-mail or post them on the forum, and I'll add them to this post. Let's see if we can list at least a hundred of these jaw-dropping insanities. And then try to convince me the world hasn't gone mad.