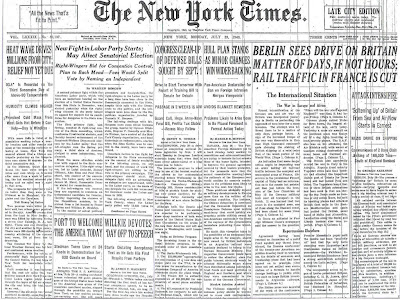 " ... while the UK is currently experiencing a cold snap and last year had the harshest winter for 30 years, the scientists said the evidence for man-made global warming had grown even stronger in the past year." Thus does Vicky Pope of the Met Office say that for global warming it was important to look at the global picture - which last year saw many parts of the world experience very warm temperatures even while the UK was gripped by snow and ice.

And she said: "We are starting to see changes in the climate even in the UK which we can link to global warming. We're seeing more heatwaves and seeing fewer of these cold winters."

The year 1940 saw the start of the "little cooling". That year and the subsequent period was marked by dreadful winters and, in some areas, fierce heatwaves (see above, column on the left - click to expand). On 20 July 1940, the Daily Express had reported that 160 Americans had died in two days because of the heat - as opposed to the 168 who had died in two weeks of air raids in Britain. "Global warming worse than Hitler, shock!" writes the Louise Gray of 1940?

Pope and the rest of the warmists see what they want to see – and fix the "evidence" accordingly. They do so because it is in their financial interests and because they are supported by institutions which stand to profit or extend their power, or both, by exploiting scares. The print and broadcast media will continue to promulgate such tosh because they are in the business of filling space and time with material from "approved" sources. They are a waste of both space and time.

It would thus be better if Johann Hari heeded his own words. He writes:


Why are the world's governments bothering? Why are they jetting to Cancun next week to discuss what to do now about global warming? The vogue has passed. The fad has faded. Global warming is yesterday's apocalypse.

He thinks he is being ironic. But, even if unwittingly, he tells the truth. How interesting it is that the only way a warmist can tell the truth is by accident.