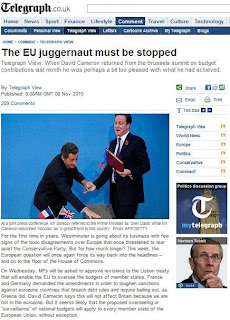 The MSM seems to be taking some pains to sell us a narrative that everything is sweetness and light in Westminster, with "few signs of the toxic disagreements over Europe that once threatened to tear apart the Conservative Party".

Having been piloted in The Independent and The Guardian, we now see The Daily Telegraph trying it on - a newspaper with such questionable political judgement that one can only marvel that it is still thought of as a serious journal in some quarters.

However, even this daily excuse for a newspaper is noticing, somewhat belatedly, that "when David Cameron returned from the Brussels summit on budget contributions last month he was perhaps a bit too pleased with what he had achieved".

That is something of a misstatement, seeing as though Euroslime Dave had achieved nine-tenths of sweet f**k-all, but then The Daily Excuse cannot admit to that it fell into the trap of believing the hype.

Nevertheless, the paper is going to have to row back a little more yet, as galloping over the horizon is Euroslime Dave's nemesis, in the form of Sidonia Jedrzejewska (pictured below right). 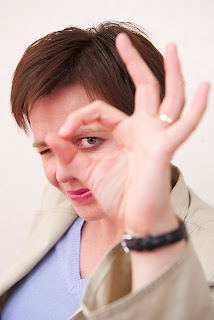 "Who she?" you might ask, and well you might. According to Reuters, she is the EU parliament's rapporteur on the budget and is currently proposing a compromise deal. Taking the 2.9 percent offered by the Council of Ministers and claimed by Euroslime as his own, the fair Sidonia is proposing to split the difference between that and the parliament's 6.2 percent, coming up with a 4.5 percent increase.

Bearing in mind that the parliament has the last say on the budget, that proposal has wings. Furthermore, it rather demonstrates that the EU parliament is not in the least minded to spare Euroslime Dave's blushes. Soon enough, he is actually going to look as stupid as he has behaved, when he has to tell his adoring public that he has been well and truly stuffed.

Furthermore, that isn't even the end of it. Sidonia is hinting that she can make up the balance over the year, with a series of "amending budgets" - additional spending requests made by parliament during the course of the year – which will actually put the EU spending back up to where the Commission wanted it.

All we can hope for now is that there are enough people out there ready and willing to spoil the narrative that Euroslime Dave has attempted to craft for himself, chiselling 4.5 percent onto his political gravestone.