Totally at odds with reality

The media have conveyed an image "totally at odds" with Ireland's reality writes Marc Coleman, tucked into an obscure corner of the BBC website. This is no great credit to the BBC – as a volume consumer of news and comment, it is bound occasionally to get things right, if only by accident which it hastily remedies with its usual diet of received wisdom.

Coleman, however, seems to tell it like it is, saying that the situation is by no means as bad in Ireland as is being made out. This is something Jim Greenhalf picked up recently when he went to Dublin – which suggests that the "colleagues" have nefarious reasons of their own for hyping a scare, none of them in the interests of the Irish.

And undoubtedly they have. Would one even begin to take van Rompuy at face value? If he shook your hand, you would be best advised to count your fingers afterwards.

So it is that the Irish are rightly suspecting a stitch-up, under pressure to accept a series of measures so damaging and so blatantly discriminatory that even Euroslime Cowan is having difficulty accepting them, much less selling them to his countrymen.

That, actually makes Ambrose more right than wrong. It isn't Ireland that is in big trouble so much as the euro and its institutions. But with Rompuy trying to dump on the Irish, one can only suspect the colleagues' motives and intentions. 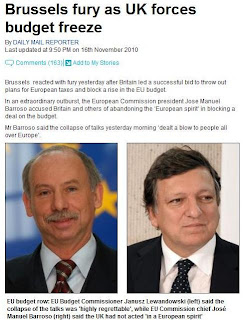 This is very much the vase with the EU's growing budget crisis which has largely been submerged by the froth about William and his bride to be.

As an incidental note, railing against the disproportionate coverage on this pair is not simply, or at all, being grouchy. There are important things happening in the world, of great importance to us, which need reporting. If we left it to the children on the editorial staff of The Daily Telegraph, we'd have spent the whole day cooing about little willie.

The point about the EU budget, of course, is that it is pointing up a tension between the Council and the Commission which we have seen building since the Lisbon Treaty, and which is far too subtle and complex for most media reporters to understand – those who mainly insist on calling the European Council a "summit".

There is really no limit to how thick these people are, which is why they need the protection of full-time jobs in newspapers. They would not survive five minutes out on their own, without their pals looking after them.

The British papers will, of course, try to "put a union jack on it", in the belief that their readers are largely as thick as they are (and, of course, many are), and in so doing will try to project Euroslime Dave as having more than a walk-on part.

But there is a lot more to this than meets the eye, with tensions and dynamics that are being missed in the welter of crap and "bread and circuses" tosh that passes for our modern media. Some of what is happening will gradually emerge, but at the moment so many people are running interference that it is difficult to ascertain the direction of travel.

There is a general theme, of course – the one that says that, as always, we are going to get stuffed, but the way things are moving, I do sense that the colleagues are losing control. All we can do is seek to help them on their way, and then stab them as they fall.