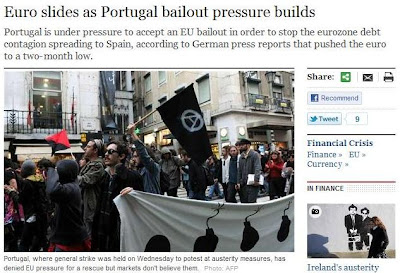 "I can tell you that it's absolutely false, completely false," says José Manuel Barroso, flatly denying that a financial aid plan is in the works for Portugal. That's Portugal domed then. Bruno does an update, telling us that the euro is sliding "as Portugal bailout pressure builds".

It struck me the other day that, not only do the eursoslime and warmists share an agenda, they very often share the same language – the same assertive, unpleasant demeanour that brooks no debate and refuses to accept that there is any valid alternative point of view.

The warmists have "the science is settled" but the euroslime had the doctrine of inevitability – it was going to happen, whether you liked it or not ... it was the only game in town, etc., etc. Now, both factions are stuffed, the latter finding that the only inevitability is their impending demise.

Meanwhile, as the FTSE dives into the red, the race to collective suicide goes on. These people really are tired of living.

Still, there is always the expert view to keep us entertained. Kathleen Brooks, research director with foreign exchange service Forex, says it is was unclear where the crisis would spread. She adds: "Whereas the Greek crisis and the start of the Irish crisis were concerned with individual sovereigns and their problems, the current chapter of Europe's sovereign woes has turned into a periphery-wide issue where no one is safe."