Backlash to the backlash 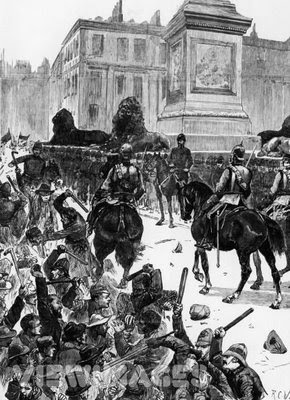 Inevitably, we've had the Daily Mail and the Tory Boys of all ages and sexes screaming for blood, demanding that the revolting stoods are put away forever. But now we see a sort of backlash to the backlash.

Thus we are told that more than 2,000 people have joined a Facebook group objecting to the "victimisation" of those arrested after demonstrating at Millbank on Wednesday. Lecturers from King's College, London Metropolitan University and Goldsmiths have publicly pledged their support.

John Wadsworth, a senior lecturer in education at Goldsmiths, said: "The situation that happened at Millbank grabbed the media's attention across the world." He adds: "We don't feel the event was necessarily as disruptive as they say it was. It detracted from the march but it did get the issue right up there in people's attention. I see more broken glass from bus stops on the pavement than I saw at Millbank."

Actually, a plague on all their houses – but we're not going to get excited about stoods trashing the offices of a political party that is trashing our constitution and when, cumulatively, we see more damage and criminality in our streets and homes than they have ever had to put up with – with absolutely nothing ever done about it.

As to stoods ... they've always been revolting. That's what they're for.