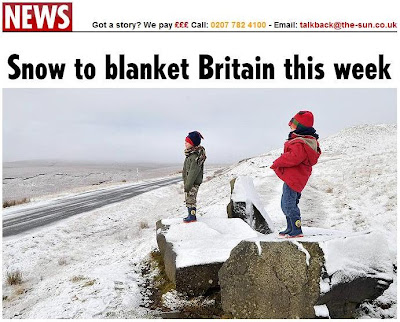 Mother nature is doing her best for us, and even The Daily Telegraph is exhibiting a sense of humour getting Louse Gray to write their piece.

All we need now is to switch off the heating of all the MPs who still believe in global warming and we might start seeing some sense – impossible though that might seem.  Better still, strip them naked, couple them up in a chain gang and have them paraded round Parliament Square, chanting "global warming is nigh", until they drop from hypothermia or exhaustion, whichever comes sooner.

Meanwhile, the Met Office is defending its performance over the Cornwall floods. Its chief meteorologist, Ewen McCallum, rounds on critics saying that, "People have to understand that not every forecast will be absolutely correct. If we got it right every time we'd be God."

Perhaps he should have a word with his climate change colleagues, who clearly do believe they are God, not admitting to any error whatsoever, claiming a degree of infallibility of which even the Pope would be jealous.