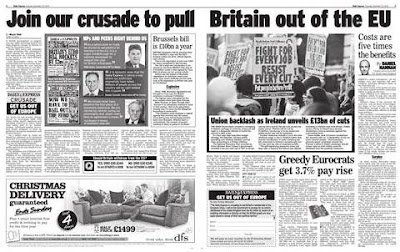 The Daily Express tells is that it is the first national newspaper actively to campaign for Britain's withdrawal from the EU. To that effect, it it mounting a crusade and asking the public to join it.

We are very pleased to see this, and hope that the newspaper of Beaverbrook prevails on this important issue. However, there is a small but important niggle. Getting out of the EU is not solely an Express campaign and the newspaper doesn't own it. In fact, it is very much a Jonny-come-lately.

The problem is – and this is not a small problem – is that we've seen this all before. The Sun, for instance, is notorious for waving the anti-EU banner when it suits it, then dropping the issue when it gets bored, or changes its political alliances.

Thus, if this newspaper tries (as it seems to be doing) to impose a proprietary stamp on the campaign (excluding the likes of UKIP and this website), then the campaign will wither on the vine. It will fail to attract support; the paper will get bored and move on, as they do so often.

We would, therefore, very much like to see the "crusade" continue, but The Express must recognise that it is joining us, not the other way around. We need a team player that will reach out and work with the broader "out" community, such that it is. The last thing we need is another solo player which has caught new religion and thinks it can run the show.