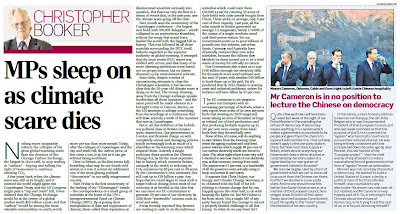 Booker actually writes two pieces today in his column, the one on climate change and the other dismissing Euroslime Dave's attempt to lecture the Chinese on democracy. The two issues, ostensibly different, are in fact very closely linked. In a properly functioning democracy, there is no way that the worst and most expensive aspects of the climate change scare could have been implemented, and it is only by ignoring their democratic duties that the MPs can permit their continuation.

Interestingly, even the lame and the stupid are beginning to get a little rattled, as they realise that driving your grannies and Aunt Mabels into fuel poverty and then hypothermia simply to satisfy the ambitions of the ghastly Huhne is not exactly a winning strategy.

But then, climate change and energy are issues where ToryBoyDiary has taken the coward's way, keeping schtum about them because they are contentious and require both drive and commitment to fight the cause. And if there is one thing the modern ToryBoy doesn't have, it is commitment – at least to anything that might require principles. Principles are divisive and might cause "splits" in the party.

However, now that Euroslime Dave has declared his hand on the EU, turning out to be a one-nation Heathite who would happily sell us to the highest bidder, we are not going to get excited about a few Tories who have finally seen the light and are getting worked up about Dave's Europe Bill.

As in the manner of all Tories, they will be full of good intentions. But when the chips are down, they will indulge in the political equivalent of coitus interuptus, getting terribly excited only then to pull out at the very last moment. As long as I have known them, that's what Tories always do. They will always let you down.

Now is the time, of course, when MPs could take on the government and make some serious demands, as the electoral arithmetic is with them. There will be few better opportunities to address the insanity and expense of the Climate Change Act, and demand real changes.

But this is not going to happen. As Booker says, MPs seem oblivious to the world around them. It comes as no surprise – but it is a touchstone issue against which we can measure their good faith and competence. For as long as that Act is in place, its serves as a marker to remind us of who our enemies are. They have "MP" after their names, they take our money under false pretences and they work in an institution which is laughably called a parliament.

To restore their own credibility - and regain the respect that should be their due - they know what they have to do. And the opportunity will not be around forever.  Sooner or later, the price of indifference has to be paid.