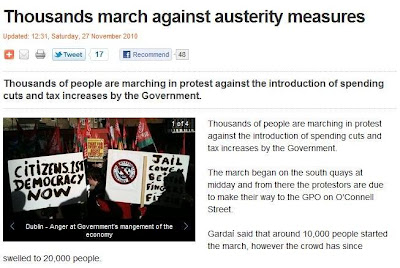 You will get little of this from our terminally parochial media. An estimated 50,000 are expected to turn up, although that information may already be out of date.

There would be more, but the trouble is that the march is being organised by the Irish TUC, to an agenda that many would not support. Many of the marchers will be public sector employees, seeking to keep public spending up. Thus, they are as much part of the problem as are the politicians against whom they are demonstrating.

This notwithstanding, the British media is not going to waste time and effort reporting on protesting Paddies. It has far more important things to deal with. 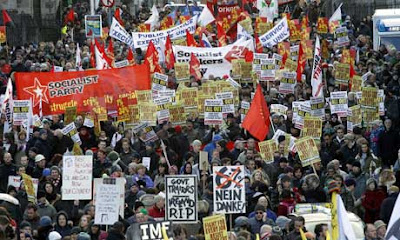 UPDATE: It looks as if more than 100,000 showed - despite overnight snow storms and freezing temperatures. Huge crowds have gathered in O'Connell Street "to demonstrate against the cuts aimed at driving down Ireland's colossal national debt," says The Guardian.