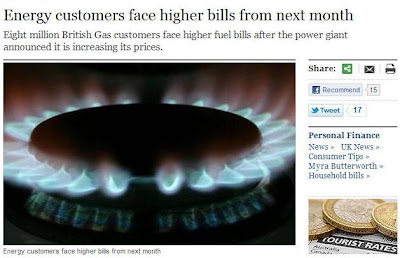 With its genius for public relations, British Gas is to increase gas prices this winter. Yet, there is an international gas glut and pressure on prices is downwards. Despite that, the company has the nerve to blame "rising wholesale prices", as well as "environmental investment, and infrastructure costs." Experts warn that households face an "extremely bleak winter" as a result of the price increases.

Adam Scorer, a director at the Government-funded watchdog Consumer Focus, says: "Consumers will be dismayed by this news. Winter is going to seem that much colder and budgets are going to be that much tighter after this announcement."

Scorer adds: "British Gas and other suppliers respond to forward energy prices, and that will be their argument that price rises are needed. However, wholesale prices are around half of their peak in 2008 and yet in the same period customers prices were cut by less than 10 percent. Consumers will feel that suppliers didn't make cuts when conditions allowed it, but are covering their profit margins as wholesale prices nudge up."

This, of course, is not the half of it. There are all the additional costs and taxes that are being thrown in. That is the real reason why our bills are going up. Bulk energy costs are actually going down ... so go figure - and get angry.