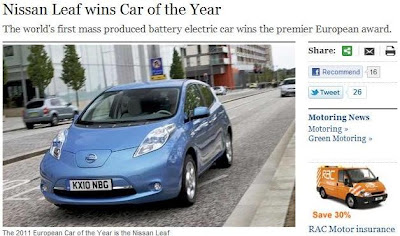 If ever there was an insane concept, it is the Nissan leaf, which needed a subsidy of £5,000 to make it just twice as expensive as a conventional, better-performing equivalent. So what do they do? They vote it European Car of the Year, with 257 votes from the 58 judges across 23 European countries.

There is something terminally sick about a group of people who can do something like this. Somehow, one is not surprised to find that the jury is comprised of motoring journalists. A sharp-eyed reader, however, notes that the registration ends in NBG. One would like to think that this was not accidental.

That the car gets the award, however, suggests a darker agenda.  Have they been bought off?