The answer is "yes" 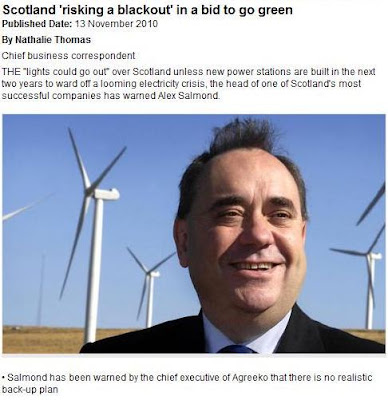 The question, of course, is "can they be that stupid?" – the "they" being politicians and in this particular case Alex Salmond. I've met Salmond several times, and watched him work. He's a smart cookie, and an extremely skilful operator. You don't get to his position and stay there without being both. But, on the matter of energy policy, he is being ineffably stupid.

That is the great paradox in human affairs. Highly intelligent and clever people are also capable of an incredible level of stupidity. The reason is the system and environment in which they work. If these people thought they were doing stupid things, they would stop.

What the system does is block the feedback loop, depriving them of signals that tell them they are being stupid, or diluting their effect. That is how generals are able to send thousands of men to their deaths, and then repeat the experience. No one is able to stand up to them, face-to-face, and tell them they are being stupid. The ones that are able do not have the access or authority.

That was the interesting thing most recently about the Spectator dinner, with Dannatt present. You had all the Spectator nobs gushing over the "great man", who was at times talking utter tosh. Yet they lapped it up. To call the man out over what any one of us would easily recognise as blind stupidity is akin to farting in church. In that environment of quasi-religious reverence, such heresy is not permitted.

That is how these people get away with it, surrounded as they are by fawning courtiers. And there is no point in hoping sense will prevail – that these people will suddenly see the error of their ways and make things better. They will not. We have to depose them.

In a democracy, this is done through the electoral system. When that no longer works, people effect change by different means. Salmond should be grateful that there still remains the residue of a democracy. When the lights go out, he may find that that is not enough to protect him.