Another win for prohibition 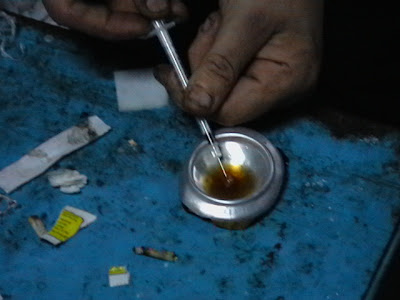 Heroin shortage in UK is "putting lives at risk" laments that trashy newspaper known as The Guardian, noting that the Afghan poppy harvest has been blighted by fungus and that dealers are adulterating supply to maintain profits.

The supply shortage was always going to cause problems in the UK, although one wonders what happened to the surplus stash the Taliban is supposed to have been salting away for a rainy day.

But the bizarre thing is that it is not uncommon to read glowing accounts of coalition troops seizing and destroying heroin in Afghanistan and now we have The Guardian weeping in its cups about a shortage of heroin which is now killing people.

Then, the same paper has Peter Preston telling us that "It's braver to quit Afghanistan now," arguing that if the date for withdrawal from Afghanistan is fixed at the end of 2014 then our soldiers may be dying for nothing.

But clearly, they are not dying for nothing. Taking all that heroin off the market, they are contributing to a dynamic that ensures that lots of addicts in the UK are suffering dangerous adverse reactions, with many of them dying.

Some might argue that there are few better uses for public funds. And clearly, you don't get to kill a load of addicts unless you are prepared to lose some of your own. And surely the death of a few teenage soldiers is a cheap price to pay to keep the drugs prevention industry going, especially as it is the taxpayer who then has to pick up the tab.

On the other hand, it could be argued that if you legalised the use of heroin, many of the health problems – which are related mainly to adulterated product and/or dirty needles – disappear, while a legitimate market takes out the profit element that supports groups such as the Taliban.

The interesting thing is that such an option is not even on the agenda. Our masters, it seems, would actually prefer to have people dying at both ends of the chain – one lot as they try to stop the product being produced and the other lot because they can't get enough of the product, all at considerable cost to the public purse.

As it stands, therefore, it would seem that we are going absolutely nowhere with our current drugs policy, making this yet another win for prohibition. But, as they say, you know it doesn't make sense.