With the ink barely dry on the Anglo-French military agreement, TLOTK does this (above)! You can bend over and kiss goodbye any special relationship with the Septics. As long as the Kermits are in bed with the Chinks, and we are in bed with the Kermits, we are totally stuffed. Now, the Septics won't even tell us the price of a cup of coffee in the Pentagon, much less give us any sensitive intelligence.

The Boy Slime was off his freaking trolley signing a deal with the Kermits. He might just as well have parcelled up all our military and industrial secrets and sent them direct to Peking, cutting out the middle man.  Did I say we're totally stuffed?  We're totally stuffed. 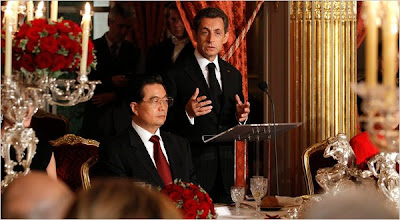 The New York Times gives much more detail of the visit, and makes it quite clear how deeply embedded the Chinese and French leaders are.

And this really is a problem. The EU may wish to call China its "strategic partner", and Sarkozy is obviously convinced that there is a euro or two to be made out of the relationship. But, to the United States, China is a potential enemy, not least over the potential flashpoint of Formosa.

Thus, you cannot be a "strategic partner" with both China and the United States. The UK has to chose and, in getting into bed with the Kermits, it has made its choice. It is a dangerous, stupid choice and one that we will all have cause to regret.