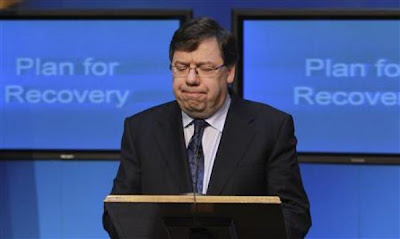 The final tally of votes cast in the Donegal South West by-election showed Sinn Féin Senator Pearse Doherty with a significant lead - the man who would burn bondholders. The Belfast Telegraph early in the afternoon thought it was all but in the bag, and it was not wrong.

Fianna Fail conceded defeat after Doherty clinched almost 40 percent of first tally votes for the seat vacated by MEP Pat The Cope Gallagher. Doherty said the message for Taoiseach Brian Cowen from the people of Donegal South West was "get out of office".

Reuters then confirmed that it was over. Doherty says he is headed to Dublin to vote against the government's budget on December 7 and try to force an election. "I will try and bring down this government and make sure all of the parties get to go to the people," he adds. This is sort of like Labour winning Witney. Sort of ... don't get too excited.

What is doubly fascinating though is that even the traditional opposition seems to have been stuffed. Fine Gael and Labour have polled below expectations. "Analysts" are telling us not to read too much into it - a remote "former" Fianna Fail stronghold near the border with the north where Sinn Féin's nationalist politics might have more appeal than elsewhere. After all, one might say, Sinn Fein has been doing so well of late.

As to the broader crisis ... I do like the sound of the death rattle in the morning, when even (or especially) sterling does a wobbly and the Huns are getting restless - Ambrose has spoken. Mind you, this one you could not make up. By the way, have you heard the new song? Sung to the tune of "Irish eyes", the first line is: As Irish banks get downgraded ....