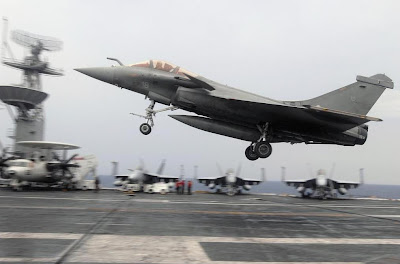 In that otherwise redundant but expensively maintained pile of masonry that pretends to be a parliament, we see the following written question and answer:


Philip Davies: To ask the Secretary of State for Defence how many Rafale aircraft the new aircraft carriers will be able to accommodate. [22247]

Peter Luff: The Queen Elizabeth Class Aircraft Carriers have been designed with the capacity to deploy up to 36 Joint Strike Fighters. The number of Rafale aircraft that they could accommodate will depend on their support requirements under different planning assumptions which we are now evaluating.

How interesting it is to see a Tory minister behave just like his predecessors. The answer, roughly translated, means, "I wish you hadn't asked that, but since you have, I'm going to tell you as little as possible." But at least it confirms that plans are well advanced to accommodate the Kermit, and in due course the Fleet Air Arm, Rafales into the European Carrier Group.

So, Kermit Airlines here we come, as the Queen's Navee sails off into the sunset flying a blue and yellow ensign and the white flag is run up the Whitehall jackstaff.