A stampede of groundhogs 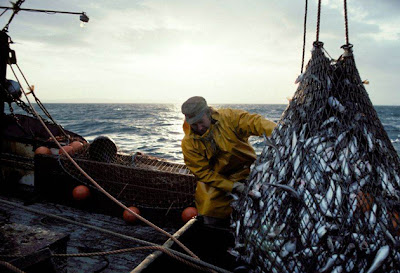 North Sea fishermen are throwing away up to half of all the fish they catch every year in what campaigners say is a chronic waste of food, says The Independent.

It tells us that almost a million dead and dying fish are discarded at sea each year, according to a campaign calling for Europe's Common Fisheries Policy (CFP) to be comprehensively reformed. Most are tossed overboard because they are too small, of the wrong species or will take fishing boats over their quotas, making it illegal to land them.

And hey! Guess what! Hugh Fearnley-Whittingstall, the food campaigner and celebrity chef, was so appalled at learning of the level of discards, describing it as an "insane waste", that he has launched a campaign to get the practice banned.

Well, well, well. Welcome to the world, Mr Hugh Fearnley-Whittingstall. Next thing you know, he'll be talking to that nice Mr Cameron, and pointing him to a useful little report on the Tory website. There again, he might save his breath. Let someone else come back in other five year's time, and The Independent can write yet another balls-aching story about reforming the CFP.