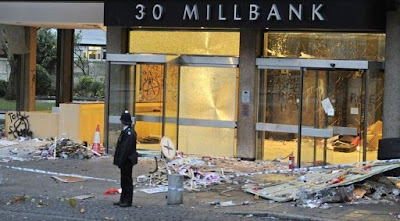 And now Euroslime Dave is whinging about the police failing to protect Conservative headquarters and for underestimating the strength of a student protest that turned into a riot.

In the real world, however – the one where you don't have machine-gun toting police guards on your doorstep and a fleet of chauffeur-driven cars – we are quite used to this. This is the world where the police cannot (or will not) prevent burglaries and vandalism, where our newsagent, in a prominent position on the high street got turned over by thieves smashing down the front door.

This is the world where the police do not bother with vehicles causing dangerous obstruction on the roads, even asserting that such obstruction is not against the law, yet happily sit in their fast cars on the motorway to pick off "speeders", mostly in the small hours of the morning when there is little traffic, because it is "safer" to stop cars then.

And, of course, this is the world were the police break into your house at midnight to cart you away to prison for not paying the police precept in protest against the useless shits who wear a uniform, take our money and don't do their jobs.

Well, it is nice to see little Dave and his Tory Boys suffer a little inconvenience from our useless plods. He joins a very large and disaffected club who were very, very happy to see Tory HQ trashed. Now you know how we feel when you wake up in the morning to find the back door wide open and treasured possessions gone.