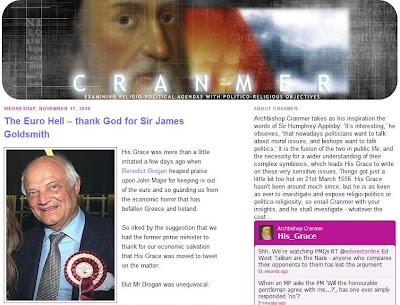 His Grace takes to task that unmitigated buffoon Benedict Brogan who heaps praise on the granddaddy of the euroslimes, John Major, for keeping us out of the euro.

For sure, Major secured the opt-out at Maastricht, but this was no great heroic feat – merely one a grotesque little man needed to do to ensure his survival. His treachery in forcing the treaty through effectively destroyed the Conservative Party, and had he forced through the euro at the same time it would have destroyed him and his government. As it was, it was a close-run thing.

Thus, as Cranmer reminds us, it was not that unpleasant little tyke who did it. The political classes would have been only too keen to join, but Sir James Goldsmith, in setting up the Referendum party in 1996, forced both the Conservatives and Tony Blair's Noo Labour into agreeing a referendum before committing us to the single currency. That stopped us from joining.

Of course, Sir James would have got nowhere without the thousands of volunteer helpers – like myself – who put months of work and thousands of pounds of their own money into the campaign. When I opened up shop in Swadlincote as a candidate for Derbyshire South against Edwina Currie, within days I had a team of twenty of so around me. And, of all the elections I have ever fought, never have I had such a dedicated, professional and hard-working team as that.

Needless to say, standing up for our principles brought us all kinds of shit from the bien pensants of the likes of Ben Brogan, the same sort who are now wisely remarking how "lucky" we are that we never joined the euro. And, as we now retain our long-held convictions that the EU is the spawn of the Devil and we need to get out, we still take all kinds of shit, the same kind of shit from bien pensants like Ben Brogan – the bed-blocker extraordinaire of political journalism.

The difference between then and now, though, is that now I have a blog – which, as you would expect, the likes of Ben Brogan and his little claque of cloggers studiously ignore because it says nasty things about them.

Interestingly, Blogger now offers page statistics to its bloggers (whether you ask for them or not) and it insists that EU Ref is getting 350,000 (or better) page views a month. Without Brogan and his vapid little mates in the clogosphere linking to us, therefore, we are doing about four million page impressions a year, access which "they" can't and don't control.

Add the more restrained and mellifluous voices such as Cranmer and we have a considerable reach, all the more influential because – unlike that idiot Brogan – we actually know what we're talking about (still more reason for them to ignore us).

At times of deep depression, which is increasingly common, we need to remind ourselves that we are having an impact. The moronic tendency is not having it all its own way. As long as there are Cranmers in this world to correct fools like Brogan (did I say the man's an idiot?) then things aren't all bad. We still have to suffer the fools, but we no longer have to suffer them in silence.