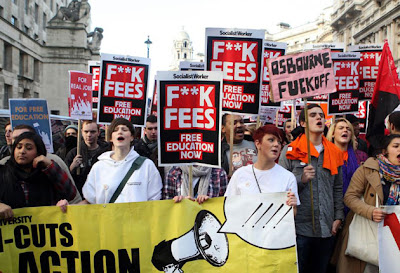 Hundreds of people were evacuated from the building housing the Tory Party headquarters today as a national demonstration against tuition fees descended into chaos. A window was smashed at Millbank Tower in central London and eyewitnesses said students attempted to force their way into the building.

This is according to The Independent. The Daily Mail has the students chanting "Tory scum" as well, which means they seem to have acquired a little education.  The pink sign betrays less erudition - the lad could at least spell the name right.

Dozens of police officers stationed outside the entrance of Tory Towers were overwhelmed as the crowd of thousands pelted them with rocks and bottles. Reinforcements in riot gear were deployed in an effort to stem the damage but appeared unwilling to engage the troublemakers, says The Daily Telegraph. Obviously, chanting "Tory scum" is the right thing to do! 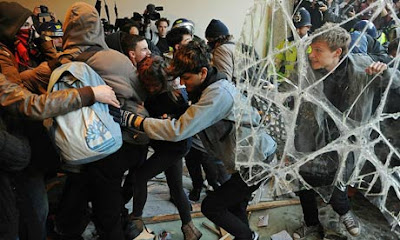 What is interesting though is that the students are demonstrating against the Tory Party and not the government. Mind you, they would have to go to Brussels to do the latter, so the Tories are as good a target as any - and the pink sign, apart from the spelling, certainly bears an appropriate message, if for different reasons.

Meanwhile, The Guardian is running a live blog, with some students complaining about "Tory cuts", although I think they've missed a letter out. However, the Daily Mash also had a reporter on the scene, and their report adds a few important details.