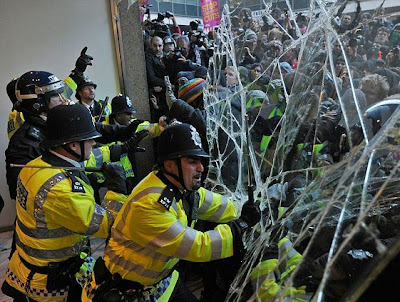 The police are complaining that they didn't see the violence coming at the Millbank demo. Yet students from a number of universities say they co-ordinated the Millbank raid via Facebook weeks ago. One 19-year-old student from Bournemouth University, said: "This has been arranged for ages and I’m surprised the police didn't do their homework." And "arranged" included the entertainment at Millbank.

But it was exactly the same with the London rave a fortnight ago. That had been planned well ahead and had been all over the internet. But the police don't get the internet, any more than do the politicians. They don't understand it, and as a result don't use it properly or effectively. Thus, we have an alternative system of communication to which these groups are completely oblivious.

Their great problem, of course, is that they believe the internet is just another means of getting their message out to a captive audience. They are incapable of understanding that the "conversation" is there, going on without them. They are not part of it because they have no listening mode. And so, they are going to get caught out again and again and again. They will never learn because they can't learn.