Now we shoot them 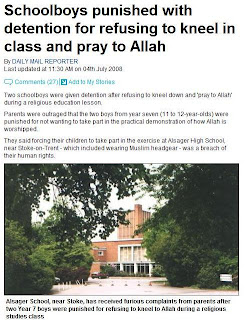 Two schoolboys, we are told, have been given detention after refusing to kneel down and "pray to Allah" during a religious education lesson at Alsager High School, near Stoke-on-Trent.

And did I look at the date of the article? No ... Who is the idiot who assumed it was current? And just saw this:

Parents were outraged that the two boys from year seven (11 to 12-year-olds) were punished for not wanting to take part in the practical demonstration of how Allah is worshipped.

Parents said that their children were made to bend down on their knees on prayer mats which the RE teacher had got out of her cupboard. They were also told to wear Islamic headgear during the lesson on Tuesday afternoon.

Deputy headmaster Keith Plant said: "It's difficult to know at the moment whether this was part of the curriculum or not. I am not an RE teacher, I am an English teacher. At the moment it is our enterprise week and many of our members of staff are away".

"The particular member of staff you need to speak to isn't around. I think that it is a shame that so many parents have got in touch with the Press before coming to me. I have spoken to the teacher and she has articulately given me her version of events, but that is all I can give you at the moment."

A statement from Cheshire County Council on behalf of the school read: "The headteacher David Black contacted this authority immediately complaints were received. Enquiries are being made into the circumstances as a matter of urgency and all parents will be informed accordingly."

"Educating children in the beliefs of different faith is part of the diversity curriculum on the basis that knowledge is essential to understanding. We accept that such teaching is to be conducted with some sense of sensitivity."

As WFW points our, this is an abuse of our education system. But it is also an indication of where the problem lies. And, if they can't see it, now is the time we start shooting the bastards.

The teacher, Alison Phillips was initially suspended – following which there following a lengthy investigation, when the school concluded that the accusations were inaccurate, and said the lesson had contained "acceptable role play" activities.

However, Cheshire East Council then said on the school’s behalf that "After full consideration of a range of other professional issues, the governing body was satisfied that an irretrievable breakdown in the relationship between employer and employee had occurred and that the employee should be dismissed from her post."

In May 2009, the fair Alison was fired. We don't have to shoot them after all! Damn.

And the next time someone sends me a cutting, PLEASE warn me if it isn't current.