A crisis a day 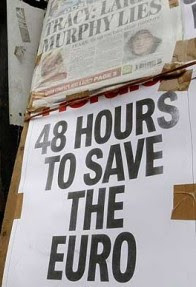 Instinct tells me that, whatever is going to happen next, it's going to be nothing like any of the pundits predict. Having been bitten more than once, one tends to steer clear of the pundits and the experts – especially the experts who are usually the last to know what is going on and invariably get it wrong.

The trouble is that there is an awful lot of grandstanding going on, an amount of deliberate disinformation, some game playing and a great deal of idle speculation, all on the back of incomplete information.

We are too used to the death-defying scenarios where, as in the great adventure serials of old like Dick Barton, we see the heroes facing certain death, only for the script-writers to inject the immortal phrase: "with one bound, they were free".

Needless to say, a "don't know" doesn't sell newspapers, and simple, straightforward analysis is thin on the ground. Van Rompuy may be warning of a "survival crisis" while others are giving mixed messages but the truth is we don't know. We do not have the first idea what is going to happen next. We can hope, and we all have our hopes, but if I was to make an informed guess about the outcome of this current crisis, it is that we are looking at yet another anti-climax, and nothing much will then happen until the next crisis.