Put them out to grass 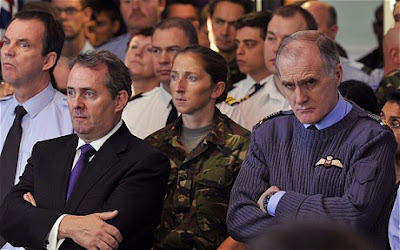 In judging the merits of any press article, you have to look at who wrote it and the newspaper in which it appears. Thus judged, the MoD story currently being circulated has two handicaps – it is written by James Kirkup and is published by The Daily Telegraph. The latter is increasingly a very major handicap, but the former is almost invariably fatal. Trusting to that lightweight fool – a fool amongst fools, so to speak – is not the best of counsels.

Nevertheless, the lightweight Kirkup has clearly got hold of something, the importance of which he cannot entirely disguise, even if one would not expect him to understand its precise nature.

With that in mind, in the MoD memo on the strategic review that has come his way, we see that the MoD and the military was even less prepared and less well equipped for the process than even we suspected. Even if our military is now increasingly unable to fight successfully the wars with which it is changed with prosecuting, one might at least expect their Whitehall Warriors to possess some skills when it comes to beating up the politicians, especially when they are led by the baleful 13th Century Fox.

However, from what we can read of the memo, it would appear that the military are just as incompetent in fighting their corner in Whitehall as they are in fighting real wars, and have suffered a grievous defeat as a result. Despite having had several years warning that there was to be a strategic review, we learn that a consultation was carried out but responses were received "only as decisions were being taken and collated only as they were being confirmed".  As if they could not have pre-empted the review and got their responses in earlier?

Crucially, so little had been done about force structures and equipment that another "six to nine months" was needed to develop "high-level military judgements", in order to decide which forces, weapons and equipment would be needed - even though it had been quite obvious for years that these matters were going to be at the centre of the review.

This perhaps is the most amazing finding of all as, despite all the warnings that they had had, the military was still no further forward in defining the kit it needed than it was during the Labour regime. One suspects that even "six to nine months", would not have been enough.  It is pretty evident that the military now has lost the ability even to decide what it needs.

It is then becomes almost laughable to find that the MoD as a whole "did not fully understand – or accept" the scale of the cuts it was facing, and that the review should have started with "a more hard-nosed description of the financial challenges".

Actually, this is utterly bizarre. One can only think that the MoD and the military in general fell for the Tory rhetoric that Brown was the destroyer of the military and that they would be in good hands after the election. Too late have they remembered that all-important rule of politics: "never trust a Tory".  I bet the little chaps and chapesses are now having second thoughts about voting for Dave.

But one thing which does not surprise me in the least is the observation that the Armed Forces had no "meaningful internal thinking" on how to deliver major cuts and effectively blocked "radical" options like restructuring the Army. As long as I have had any dealings with the MoD and the Armed Forces, I have been aware that these institutions have had no "meaningful internal thinking" on just about anything.

None of them ever "do" thinking in any meaningful way, or have any capacity so to do.  This is why they are in the mess they're in and why, when push comes to shove, we need to think very hard about giving them anything serious like weapons, in case they hurt themselves - or anybody else.

I suppose there is just about enough intellect there to be able to plan and mount a ceremonial guard for wee willie's wedding, and organise a fly-past. They might even pass muster for an EU parade, if they can buy enough white wellies and gloves (to say nothing of the flags) but on current form, the sooner they are all put out to grass the better. If we are going to save money, we might as well do a proper job of it.