Almost exactly 24 hours behind our story, we get The Daily Excuse running its version of how police intelligence failed on the Millbank demo. Newspapers being newspapers, however, their story is one-dimensional, focusing entirely on this demo, and still not making the link with the London rave and a similar failure in intelligence.

As always, we get the reliance on talking heads instead of thinking and analysis, and thus we get a quote from Kit Malthouse, the head of the Metropolitan Police's "watchdog". 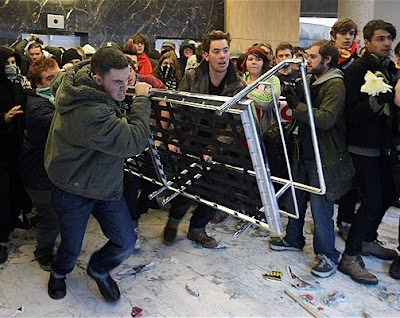 Transcribed faithfully by the newspaper, he trots out the rather lame offering that: "The problem seems to be a gap in the intelligence. From the large amount of work they did before the event, did police they have the right intelligence? And what assessment did they put behind that, which meant they put 250 people on the streets to police it?"

But actually, the problem is exactly as we described it yesterday. Since then, we've had junior plods tell us they knew what was going down, but senior plods didn't listen ... which is about par for the course.

That problem, is that the senior plods don't "get" the internet. It's not just a "gap" but a systemic failure. That means there is no quick fix. The defect is characteristic of the corporate mentality and stems as much from attitude as ability.

From the same wellspring come the MPs and the anally retentive ministers who are so grand that they can't possibly read their own e-mails, and get their staff to print off messages. These same people don't do Google and don't read blogs – other than a very limited number which share their views. Some actually take a perverse pride in not even being able to switch on a computer. They think it is somehow clever to be computer illiterate - computers are something the paid help does.

Yet these are the dinosaurs in charge, the ones that get caught out and will keep getting caught out. And that is why we, 200 miles from this action – with an international network of watchers – are better and more quickly informed than the people at the centre, who claim to be (or should be) on top of things.

Interestingly, that is how I knew, well before the MoD, that the terrorists in Iraq were using the internet to publish training manuals on constructing and placing IEDs – and in fact had to tell them what was going on. That is how we picked up the Van Rompuy story a day before The Daily Excuse and could pick up many more if we could be bothered and had the time to write them up.

If information is power, the flow and direction of information is changing and with it the balance of power. The traditional purveyors are behind the curve and they are losing out.