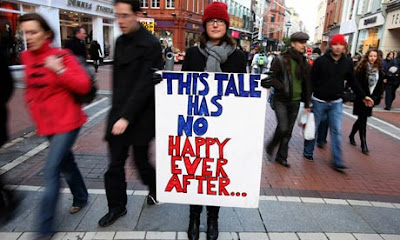 With a history of being a cheerleader for Britain joining the euro, and with consistent euroslimic tendencies, The Independent has also been to the fore in supporting the EU line over Ireland. And now it continues by telling us: "Economic crash to drive 100,000 out of Ireland."

There is, of course, no "crash" in Ireland – although no one would deny that the country is in difficulties. But the euroslime are not in the game of telling it how it is. They have an agenda to run.

Other accounts make it very clear that we cannot afford Ireland to go down the pan, as British bank exposure to Irish debt exceeds £140bn. This is not a local affair. The British taxpayer, who will have to pick up the final tab, is potentially at risk, with a huge degree of exposure.

This is not a time, therefore, when we can afford the media to go AWOL, although that is largely what it is doing. For the main, though, we are in waiting mode.

As Yusuf Heusen, senior sales trader at IG Index, put it, courtesy of The Guardian blog: "Today's general lack of direction is likely to be a result of cautious investors waiting to see how the Irish debt situation plays out before making any significant moves."

It looks like the situation is limbo until later this morning, when the IMF officials fly into Dublin, and the next round of rather dubious discussions begin. There is no chance, just yet, that we wake up to see the euro crash and burn. But, as always, the odds are shortening and our confidence increases.