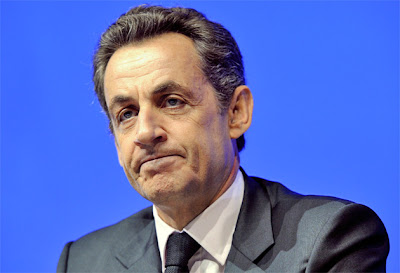 The strain of keeping up with the twists and turns of the euro must be getting to the poor little chap – that and being a crook. But it takes different people in different ways and to M. Le president it comes in the form of sounding off at journalists, calling them a bunch of "paedophiles".

Apparently, this came during a furious off-the-record exchange at the Nato summit in Lisbon last week, after a journalist had asked him a question about the latest developments in the "Karachigate" affair: allegations that the cancellation of commissions on a French submarine contract led to a bomb attack in Karachi in May 2002 in which 11 French engineers and four Pakistanis died.

Sarkozy is reported to have launched into a tirade about press ethics and the use of unnamed sources. "You say ridiculous things. You check nothing," he said to the journalist who had asked the question. "I have nothing against you but it seems that you are a paedophile. I am personally convinced of that fact. I have spoken to the security services but I won't tell you which ones. I have seen someone but it was just a verbal exchange. But now I am personally convinced that you are a paedophile."

After a stunned silence, we are told that journalists at the briefing at which the insult was delivered then moved on to other subjects. Before he left, Sarkozy is reported to have said to the journalists: "So long paedophiles, see you tomorrow."

Sarkozy, of course, is part French and part Hungarian, which perhaps excused his outburst ... that and being a crook, but what price UKIP MEP Godfrey Bloom who has neither of the first two excuses?

This has not stopped him indulging in equally oafish behaviour, calling the altogether unspeakable Socialist MEP Martin Schulz an "undemocratic fascist" in the EU parliament. Bloom, apparently, did so in an exchange after he had interrupted Schulz, calling out the infamous Nazi slogan, "Ein Volk, ein Reich, ein Führer". Thus did he demonstrate that, when it comes to subtlety and wit, you can always rely on Bloom.

Predictably, this behaviour has got him thrown out. England Expects tells the whole story - two turds together, really. Nevertheless, this should give Bloom all the time in the world to discuss with Sarkozy the merits of stuffing the press corps with paedophiles. We thought that applied mainly to Belgian politicians, but since Belgium hasn't had a government for six months, presumably they've taken on additional jobs for something to do.

With the political classes upping the ante in this way, though, we're very soon going to run out of insults. Next it will have to be "fascist paedophiles", I suppose. But where do you go after that?