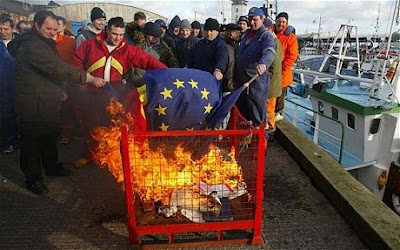 We've waited a long time for this. Ambrose tells us that Spain and Portugal are "under fire" as bond spreads hit record, which means that borrowing costs for Portugal and Spain have surged to danger levels. And the driver of this is fear, fear that Europe's leaders are losing political control of the Irish crisis and have yet to agree on a coherent plan to tackle the eurozone's deeper debt woes.

Well, the colleagues wanted it. They got it. This is the crisis they have all been waiting for, the one when - in theory - they were supposed to come out the other side with a full-blown "government of Europe", armed with a complete suite of economic powers.

It could yet happen – never rule out the Devil's miracle. Lucifer has his powers. But the smart money is on collapse, even if it could still take longer than most expect. The core construct of a single currency, without economic governance, a unified budget, the controls and the sanctions, plus the fiscal transfers and all the other apparatus, could never work.

The only real chance they ever had was that the member states would agree permanently to cede sovereignty and create that economic government, before the system got out of control. It is now too late. The only option now is to crash and burn. Today the flag, tomorrow "Europe".