The aliens take over 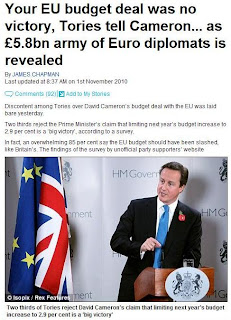 Chickens come home to roost as even the lame and the dim cotton on to the fact that The Great Leader is pulling their plonkers – those very few that have them.

Most of the problem, though, is that the faithful lack brains as well, which is why they voted for The Boy in the first place. But, as they say, vote in haste, repent at leisure. They've got him, they've saddled us with him and now we are all paying the price ... £5.8bn and counting.

And then there's the issue of defence integration. The Boy is meeting Sarkozy, The Leader Of The Kermits, tomorrow when we get sold out big time.

The Boy and TLOTK are preparing to unveil a "new approach", across the army, navy and air force, which goes "beyond the agreement last month for the countries to work together on the two British aircraft carriers".

The 13th Century Fox was trying to make his case yesterday. I always thought the man pathetic – and now he's proved it, with Autonomous Mind putting the boot in. Anyone who thinks that Anglo-French military "co-operation" isn't a Trojan Horse for the EU Army needs their brains examined.

But don't say I didn't warn you. We are in the grip of the euroslime. Democracy has ceased to function in this country - where is the democratic mandate for a merger of the Armed Forces with France and the rest of the euroweenies?

This ain't going to stop until we see blood spilled. Whoever is up there in No. 10, this is not our government ... not a British government. The aliens have taken over.