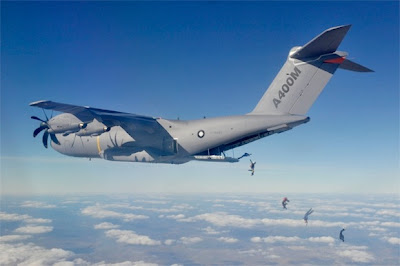 The Register is having great fun with former defence minister, Lord Gilbert, who has described the A400M military transport plane as a "Euro-wanking make-work project" in the written Parliamentary record. The Peer further goes on to say that he regards the decision on the A400M as the most bone-stupid in the 40 years that I have been at one end or other of this building (parliament). It is an absolutely idiotic decision.

With the price spiralling, it is actually working out at nearly twice the price of the more capable C-17, the last known figure being about £130 million compared with about £70 million each for the acquisition of the C-17.

All of this raises questions as to why this expensive white elephant was not cancelled during the strategic defence review. Lord Gilbert thinks he has the answer – it is pandering to the French who want the aircraft so that "Europe" is not dependent on the United States for military transport.

This, of course, is part of the story – except that it does not hold up. So many components and systems will be US-sourced that the aircraft could not fly without active US co-operation.

Nor is it a make-work scheme of any great value. If Gilbert had done his homework, he would have known that, when we bought the C-130J in 1994, Lockheed placed 100 percent offset contracts with UK companies, and we are major contractors in the global programme, getting about 10 percent of the value of every C-130J sold. We get far more from this than we will ever get from the A-400M.

The real reason, of course, is entirely political – the pursuit of European defence integration, in this case the European Air Transport Command, the proto-EU Air Force to rank alongside the EU Navy.

And this has been known all along by the Conservatives, which bought into what was then the Future Large Aircraft (FLA), announced by euroslime defence minister Malcolm Rifkind on 16 December 1994. And that is why the UK will not cancel its A-400M order, no matter what it costs. The Tories, since the very beginning, under Ted Heath, have been leaders of the pack in promoting European defence integration, and are the most enthusiastic proponents of it. And the FLA is a keystone project.

This is not going to change under Euroslime Dave's watch. He is truly the Heir to Heath. Along with promoting the European Carrier Group, he will be right behind the UK's entry into the European Transport Command.

Fatally, though, this is the elephant-in-the-room that the media does not talk about – not even The Register. Thus, rather like Charlton Heston as Detective Thorn in that epic film, who famously declares, "Soylent Green is people!", we need someone to shout out loud, "Tories is Euroslime".

They are selling out our Armed Forces from under our noses, and no one seems to give a damn.