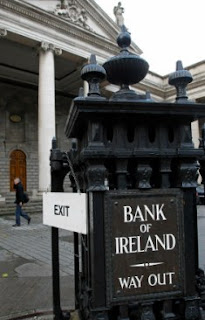 ... until it has been denied by a minister. And it certainly looks to be true that Ireland's financial ordeal is far from over.

But it seems that it is going to cost us a fortune, thus adding very little to our happiness index. By my reckoning, if the population of Eire id about five million, that works out as a gift of £2,000 from the British taxpayer to every man, woman and child in the Emerald Isle.

As the talk generally is of Ireland needing a £70 billion bail-out, this works out at £14,000 per Irish head, which is an awful lot of debt for one very small country to cover – somewhat underlining the scale of the mess their politicians have created.

Meanwhile, with more details about Greece emerging, we are told that the EU is spending £850 million of taxpayers' money constructing a new HQ for translators and lawyers. The building in Luxembourg will house support staff for the EU Commission and Parliament - which are based in Brussels and Strasbourg.
Due to be completed by 2016, the 3.1 million sq ft building will add to the almost 25 million sq ft EU officials already occupy in the three cities.

The contrast, one with the other, points up what we are having to deal with – public profligacy and incompetence, with the taxpayers having to pick up the tab. There is fast coming the time when we are going to have to rise up and slaughter them. We are truly domed.