We have been there so many times 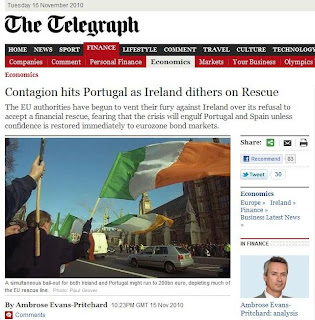 It is not exactly the "boy crying wolf" syndrome, although we have been regaled with so many stories of the imminent collapse of the euro – and predicted the same ourselves – that we struggle to hope that this time it is for real.

However, the indomitable Ambrose is certainly ladling it on thick, with his talk of contagion hitting Portugal as the stresses spilling out from Ireland take hold.

Confusion, ill-will, acrimony and even panic seem to be dominating proceedings, and for once we seem to have the "colleagues" thrashing around with very little idea of what to do and how to manage the situation. There is a whiff of the euroslime having lost control.

On top of that, at 12.06 am, we had Reuters reporting that the budget talks between the EU parliament and the Council had "collapsed" - "threatening to throw EU financial planning into chaos and boding ill for the bloc's ability to reach deals", says the agency.

Generally speaking, it is very bad form to derive too much enjoyment from the misfortunes of others but, in this case, we are happy to make an exception, especially as Merkel is signalling that collapse of the euro could bring down her beloved "Europe". With the collapse of the budget talks providing a happy precedent, it just begins to look as if we can once again live in hope.