The destroyer of nations 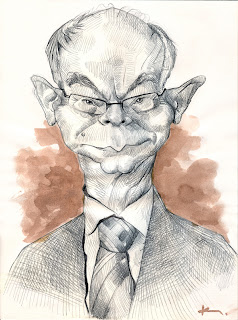 Yesterday, Herman Van Rompuy pronounces the first "Berliner Europa-Rede", whatever that is – not that I actually care. What I do care about is the fact that this man actually exists, and that at public expense he has a forum to promote his loathsome doctrine. Thus does he say:


We have together to fight the danger of a new Euro-scepticism. This is no longer the monopoly of a few countries. In every Member State, there are people who believe their country can survive alone in the globalised world. It is more than an illusion: it is a lie!

This is a tribe so scarred by the experience of continental Europe and the rise of the Nazis that they can only see history in terms of a one-dimensional pastiche, and are locked into the mistaken belief that nationalism is evil. But that truly makes them our enemy. There can be no accommodation or compromise for they mean to destroy us. They are the destroyers of nations.