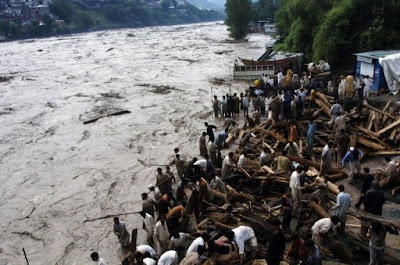 So, floods sweeping Asia have killed more than 900 people, washing away thousands of homes and destroying infrastructure in some of the worst scenes in living memory. Heavy monsoon rains have exacted the heaviest toll in northwest Pakistan, with 800 confirmed dead and the regional capital Peshawar cut off. The deluge has also killed another 65 people in mountainous areas across the border in Afghanistan.

Floods devastating northeast China have killed at least 37 people and destroyed 25,000 homes, with the authorities racing to intercept vessels that broke their moorings and retrieve barrels full of explosive chemicals headed for a dam.

The worst floods in living memory have destroyed homes and swathes of farmland in northwest Pakistan and Pakistani Kashmir, with the main highway to China reportedly cut and the military deployed to help isolated communities.

The United Nations says almost a million people had been affected by the Pakistan flooding. Footage shot from helicopters shows people clinging to walls and rooftops as gushing waters rampaged through inundated villages. Others walked barefoot through the water to seek safety, carrying their belongings and with children on their shoulders.

"This is the worst ever flood in the province of Khyber Pakhtunkhwa in the country's history," provincial information minister Mian Iftikhar Hussain said. "The death toll in floods and rain-related incidents has risen up to 800 across the province," he said, with another 150 people missing.

Now then ... is climate change supposed to bring drought or floods to these regions? It is difficult to keep up with the latest predictions, whatever they may currently be.