The man really is thick 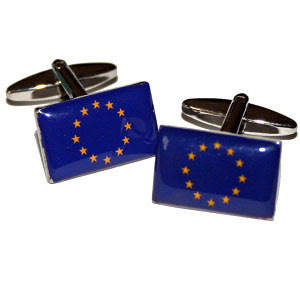 Daniel Finkelstein in The Times recalls the first time he had lunch with David Cameron, when he noticed that he was sporting a pair of EU cufflinks.

This, he says was a striking thing to do in those days, the early 1990s. The Conservative Party was rowing constantly about the EU, and he worked as a special adviser to a eurosceptic cabinet minister.

Naturally, Finkelstein asked him about them. "I don’t think European federalists should have a monopoly on being part of Europe," Cameron replied. And in explaining his choice of cufflinks on that day many years ago, he provided an insight into the position on Europe he has held since. From there, we get Finkelstein's analysis of Cameron's position.

First, he is properly, robustly Eurosceptic while being completely at home with membership of the EU. Second, he has watched as two prime ministers became engulfed by the European issue, which seriously hampered their ability to do anything else. And third, he experienced defeat and policy made for opposition. Now he wants victory and policy that allows him to govern successfully.

It is possible, one assumes, to offer a more facile analysis – but it is difficult to imagine how. From the very start, the idea of a eurosceptic voluntarily wearing the badge of shame is preposterous. That someone also can think of being "part of Europe", while wearing the symbol of the organisation that enslaves "Europe" is equally so. A person who confuses "Europe" with the European Union is not a eurosceptic.

Then, anyone who is "completely at home with membership of the EU" is not a eurosceptic – period. Forget "properly, robustly". They are not eurosceptics.

As for the rest, that tells its own tale. Cameron has seen first-hand the effect of the EU on Conservative Party politics. Now he wants to win an election and is determined not to let "Europe" interfere with his chances of victory.

Cameron is a man without understanding and without principle. He knows nothing about the European Union, and his only interest is in winning. The EU issue is a barrier, a pitfall ... it must be neutralised. That is Cameron's only interest.

And Finkelstein believes he is a eurosceptic? No wonder we find it difficult to make progress. With somebody so unbelievably thick, we are not even past first base.