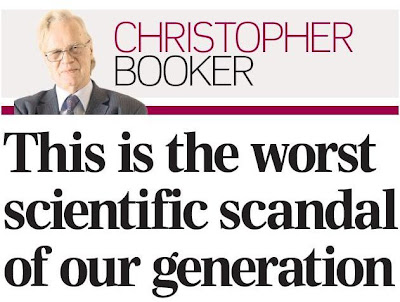 You actually have to search quite hard to find anyone rash enough to stand up for the scientists at the heart of the "Climategate" scandal, but they are there if you look.

And while the carefully sanitised arguments are almost plausible, they evaporate in the face of Booker's latest column (headline above), with the strap, "Our hopelessly compromised scientific establishment cannot be allowed to get away with the Climategate whitewash."

This is precisely what the BBC is trying to engineer, so what Booker does is remind us of why they should not, telling us quite how important the "Climategate" gang are to the warmist religion.

What we are looking at here is the small group of scientists (WUWT gives some more detail) who have for years been more influential in driving the worldwide alarm over global warming than any others, not least through the role they play at the heart of the UN's Intergovernmental Panel on Climate Change (IPCC). Booker goes on to tell us:

Professor Philip Jones, the CRU's director, is in charge of the two key sets of data used by the IPCC to draw up its reports. Through its link to the Hadley Centre, part of the UK Met Office, which selects most of the IPCC's key scientific contributors, his global temperature record is the most important of the four sets of temperature data on which the IPCC and governments rely – not least for their predictions that the world will warm to catastrophic levels unless trillions of dollars are spent to avert it.

Dr Jones is also a key part of the closely knit group of American and British scientists responsible for promoting that picture of world temperatures conveyed by Michael Mann's "hockey stick" graph which 10 years ago turned climate history on its head by showing that, after 1,000 years of decline, global temperatures have recently shot up to their highest level in recorded history.

As to the rest of the senders and recipients of the leaked CRU emails, they constitute a cast list of the IPCC's scientific elite, including not just the "Hockey Team", such as Dr Mann himself, Dr Jones and his CRU colleague Keith Briffa.

Also included are Ben Santer, responsible for a highly controversial rewriting of key passages in the IPCC's 1995 report; Kevin Trenberth, who similarly controversially pushed the IPCC into scaremongering over hurricane activity; and Gavin Schmidt, right-hand man to Al Gore's ally Dr James Hansen, whose own GISS record of surface temperature data is second in importance only to that of the CRU itself.

In terms of the importance of the leaks, Booker sees three main threads. The most obvious, as lucidly put together by Willis Eschenbach, is the highly disturbing series of emails which show how Dr Jones and his colleagues have for years been discussing the devious tactics for avoiding release of data under freedom of information laws.

Why they should have been so reluctant to release their material is the second thread – the leaked documents showing how the scientists have been manipulating data through their tortuous computer programmes, always to point in only the one desired direction – to lower past temperatures and to "adjust" recent temperatures upwards.

The third "shocking revelation" of these documents is the ruthless way in which these academics have been determined to silence any expert questioning of the findings they have arrived at by such dubious methods – not just by refusing to disclose their basic data but by discrediting and freezing out any scientific journal which dares to publish their critics' work.

It seems, writes Booker, that they are prepared to stop at nothing to stifle scientific debate in this way, not least by ensuring that no dissenting research should find its way into the pages of IPCC reports. He adds:

Back in 2006, when the eminent US statistician Professor Edward Wegman produced an expert report for the US Congress vindicating Steve McIntyre's demolition of the "hockey stick", he excoriated the way in which this same "tightly knit group" of academics seemed only too keen to collaborate with each other and to "peer review" each other's papers in order to dominate the findings of those IPCC reports on which much of the future of the US and world economy may hang.

In light of the latest revelations, it now seems even more evident that these men have been failing to uphold those principles which lie at the heart of genuine scientific enquiry and debate.

Amazingly, the warmist, Charles Clover, seems to agree. However, writing in The Sunday Times, he also sympathises with "busy scientists" for not wanting to release data to people who want to rubbish it. Clover thus seems unaware of the quite deliberate and structured attempts to conceal information.

Equally, other comments are wide of the mark. The scientific establishment needs to set out better ground rules and insist on more openness, Clover writes – again seemingly unaware that the essence of science is disclosure, and the ground rules have been set over Centuries.

Nor can one agree with Clover's observation that "establishment science has no means of engaging with outsiders in the blogging age" – not least when the group launched its own website, RealClimate in December 2004, for precisely that purpose.

It thus takes Jonathan Leake, Environment Editor of The Sunday Times to point out, through the words of "climate change sceptic" Patrick Michaels, the real impact of "Climategate". "This is not a smoking gun; this is a mushroom cloud," he says.

Not all the Sunday newspapers are up to speed though. The Observer is telling us that the leader of the BNP, Nick Griffin, is one of the MEPs who will represent the EU parliament at the Copenhagen next week - and offers a "debate" with James Hansen and others.

For light entertainment, the paper then offers a piece headed: "Climate change: Gulf stream collapse could be like a disaster movie - Scientists predict an ice age could be provoked in a matter of months." The Independent on Sunday, on the other hand, tells us that climate change is a "planetary emergency". That is these papers' idea of journalism.

CLIMATEGATE THREAD
Posted by Richard at 01:25