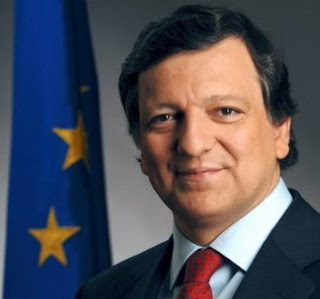 Given how excited our little hacks get when there is even a minor reshuffle in our provincial government, it really is quite interesting how little attention is paid to the selection of a completely new government.

When I think about it – which is not more than about twenty times a day – the genius (if it is that) is in calling the EU commission a "commission". It all sounds so harmless and anodyne. If they called a spade a bêche, however, it would be called the "EU government" – but that would give the game away.

In any case, our media is really only interested in provincial politics, so that lot in Brussels could run up the Jolly Roger and declare themselves the supreme rulers of the universe and the Westminster lobby would still be more interested in their own local soap opera.

Thus we see in The Daily Scarygraph "Ministers urged to take action against bank charges". But the masters of the universe have already spoken ... ministers can't do anything unless Brussels lets them.