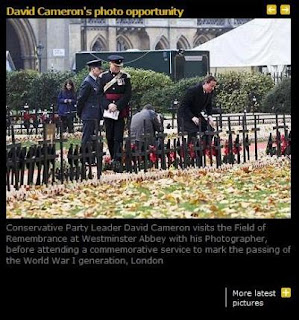 The Daily Mirror is waxing indignant over the alleged use by David Cameron of the Remembrance Day ceremony for a photo-opportunity.

This follows in the wake of the controversy of the Jacqui Janes affair, which this paper also thinks was exploited by the Conservatives, through its new ally, The Sun.

This development is noted by Conservative Home, while the role of the Murdoch news empire has been questioned in The Independent.

That The Sun is quite deliberately fomenting political discord against Labour and is supporting the Conservatives, is a matter of record, and the Jacqui Janes affair illustrates that the paper is prepared to go to considerable lengths in pursuit of its agenda. What is probably not known, but undoubtedly suspected, is quite how far the paper is willing to bend the truth to make its stories fit the agenda.

Not only have we seen the paper print stories that are not true – which is not unusual – but also where the journalists writing the stories knew them to be untrue at the time of writing. The key facts would have robbed the story of its political edge, and were thus quite deliberately discarded.

This, it seems to me, marks a new development in the degradation of journalism and of party politics. One is used to the idea of "spin" and all that implies but the process of inventing stories, for political advantage, is something much more sinister.

Not too dissimilar, it also seems to me, is Mr Cameron's use of the war dead as a photo-opportunity. Everything now has become a "media opportunity", a vehicle to convey a message. Nothing is so sacred that it cannot be exploited for political advantage.

That is not to say that, in their own ways, New Labour – which started the rot – is not just as bad, or that this new low has not left the Lib-Dems untouched. But it also spells the death of serious politics. As we lamented yesterday, instead of a strategic debate about Afghanistan, we get unseemly point-scoring over marginal issues, which serve no purpose other than to unbalance political rivals.

Whatever else, our troops in Afghanistan deserve better than this – but so do we all. Politics should be about issues, and while there is always an element of personal confrontation, we have reached a stage where the confrontation is everything and the issues are taking a back seat.

It is a moot point as to whether this process is now reversible – at least, in the short term – but as long as it lasts, we need to be aware that normal standards of truth and fairness (which were always low) have been abandoned altogether. Media has become propaganda. Events are now merely "photo opportunities" and truth has gone on an extended holiday.