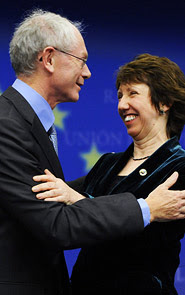 There's no other way of looking at the result ... Dick Van Dyke and the Baroness Completely Ashen. The two posts of European Council president and "foreign minister" have been successfully neutralised by the commission and its allies.

The appointments are almost a joke – except that they are not. The candidates admirably fulfil the essential (commission determined) qualifications for the job. They are both nonentities, they have personalities as close to those of a discarded cod as it is possible to be, and still be breathing, they have absolutely no qualifications for the jobs and neither were elected for their erstwhile offices.

We should note, however, that the Baroness was voted politician of the year in 2006 by the homosexual lobby group Stonewall – which is about as near as she has come to being elected for any public office. She should do well in the EU.

Predictably, though, there is a considerable amount of press comment, much of it not worth reading. Once again, The Independent makes most sense:

In both cases, their main qualification was that they offended the fewest number of EU leaders and competing EU sensibilities. They were lowest common denominator candidates for posts originally conceived as symbols of a more visible, more democratic, more efficient, more globally effective European Union.

Mr Van Rompuy fitted the bill as a competent, uncharismatic right-of-centre man from a small country who would not get big ideas and annoy the large countries.

Lady Cathy Ashton balanced the ticket as a competent, uncharismatic left-of-centre baroness (ie woman) from a big country, who could co-ordinate, rather than create, European foreign policy. She had the added advantage of being British: a useful consolation prize for Gordon Brown and another attempt by the wily continentals to remind the island race – 36 years on – that they are members of the EU.

Stitch up? Well of course it was a stitch up. How else, in the present state of things, can such jobs be decided? A proper selection process – let alone an election – would have endowed the posts with real influence and real power.

It doesn't really get to the core of what is going on, but then it will take time to tease out the real agenda. Van Rompuy, in particular, has "form" in Belgian politics. This is a man with an agenda, and its all bad. More of that later.

For the moment though, M. Monnet can now rest safely in his grave. The hegemony of the commission is safe – the Commission have people in place that they control. The EU "leaders" may think they have been in the driving seat, but this is a "dual control" vehicle and the driver's side controls are not actually connected to anything.