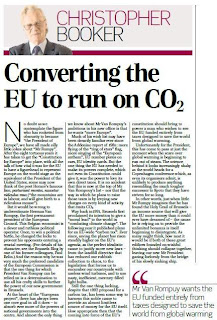 It comes as no surprise, therefore, to see pieces in The Sunday Telegraph today which point to EU plans to circumvent the current restrictions, with ideas for imposing direct taxes.

One of the offerings comes from Booker in his column who warns us not to underestimate Herman Van Rompuy, the first permanent president of the European Council. Almost the only thing we know about his ambitions in his new office is that he wants "more Europe". At the top of the list is the question of direct taxation and at the top of that list is the idea of levying new charges on every kind of activity that emits CO2.

Nor indeed is this a new idea. Way back in 1991, Brussels first proclaimed its intention to give a "moral lead" to the world in "combating climate change" – not least because its polling indicated that the project scored well on environmental issues.

The following year it then published plans for an EU-wide "carbon tax" and, ever since, saving the planet has risen steadily higher on the EU's agenda as the perfect idealistic cause to justify more new laws. Now that the Lisbon treaty is in the bag, this is the next in line for attention, and Van Rompuy is the man who intends to make it happen.

A similar theme is thus rehearsed by Bruno Waterfield and Justin Stares, also in The Sunday Telegraph, which notes that Van Rompuy will put his weight behind taxation proposals within days of taking office in January.

Apart from a CO2 tax, we are told, the new man will also be considering a Euro-version of a "Tobin Tax" – a levy on financial transactions. Either will result in a stream of income direct to Brussels coffers, "funding budgets that critics say are already rife with waste and overspending".

In this piece we are also warned not to underestimate Van Rompuy, who seems to have handled his own appointment with some guile. According to Belgian newspaper De Morgen, he told colleagues a few weeks ago that to achieve a top EU function you must "not ask for high office, but become a grey mouse, and offers will come."

Well, the offer came and was quickly accepted. Now we have an arch integrator in post, and the agenda goes rolling on. Once again Van Rompuy demonstrates the classic dynamic of the EU. There is no such thing as "enough". The moment they complete one power grab, they immediately start planning the next.

There is no accommodation to be had with this monster. We must destroy it, or it will destroy us.

ROMPUY THREAD
Posted by Richard at 16:57