Nothing to lose but your chains 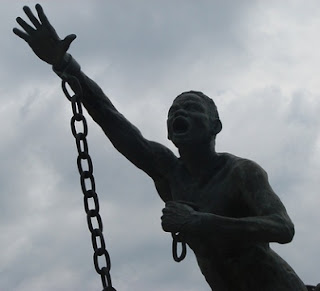 The little Beeboids must be getting a little worried about their favourite construct, enough at least to broadcast a programme called "Divorcing Europe" this evening on BBC Radio 4.

To judge from the publicity blurb, it will be the usual amalgam of "one the one hand, this – on the other, that", without coming to any overt conclusion, although you can bet that the subliminal message will be that it is all too difficult, so we'd better make the most of it.

As always with the Beeb, they go for the usual "talking heads", so – at least from what is on offer in the blurb – there is very little new, or illuminating. We see the same old sound-bites and the same over-rehearsed, tired arguments that we have always heard.

Perhaps, as it does with the EU, the BBC is aiming to bore us to death with the "eurosceptic" argument, making it so dull and deadly that Joe Average simply walks away.

There is nothing, for instance, at least in the blurb, about immigration from the EU, common asylum policies and other such sensitive issues, which would spark a real debate. Therefore, the essence of the Beeb grip – and the hidden bias – is what is not said, rather than what is.

As an example of just this, we have the notorious Europhile, Stephen Wall, who bemoans "a major loss of British influence" with the UK no longer being part of the EU. But he is talking about trade.

"There is no alternative way of advancing the British national interest," he says. In trade negotiations for example "the Americans play hard ball… you have to have the strength to hit them hard where it hurts in response. On our own, it's quite difficult for us to do that".

This is moonshine. As it stands, we have no voice in trade talks, other than through the Council, where we agree a "common position" with the other 26 members, and then are forced to leave the EU to do the negotiations, in which the French agenda invariably predominates.

On the other hand, as an independent nation – and one of the largest food importers in the world – we would have enormous clout, not least if we allied ourselves with the Cairns Group. Under our leadership, this could become a powerful third force in global trade politics, and help to balance out the monolithic blocs of the USA and the EU. In other words, we would have far more influence out than in.

That sort or argument, however, you will not hear from the Beeb, or indeed from the born again eurosceptics. Having discovered "Europe" rather late in the day, with the zeal of the convert, they are rehearsing issues which were being addressed well over ten years ago, with as little success then as they will have now.

We refer, of course, to the TPA (of which my co-editor has some views) – which is bidding for the position of High Priest of euroscepticism. Frankly, they are welcome. But, to focus on the money issue is rather old hat. More than two decades ago, when people were fully aware of the amount of money pouring into the coffers of Brussels (remember Maggie and the rebate argument?), it never gained much political traction.

If there is an issue which will get Joe Average worked up, it is immigration and open borders, but that is not on the TPA agenda. But, more to the point, eurosecpticism, under its new proprietors, seems to be locked into an 80s groove, with very little to offer, and nothing by way of a serious view of how we might look for a way out.

At the heart of the problem is the limited understanding of the way we are governed these days. We, for instance, have written of the role of international quasi-legislative organisations – such as UNECE. In this context, when it comes to the fabled "single market", many of the standards which are promulgated as EU law originate with these organisations.

This actually makes the EU merely the "middle man" translating the standards into law – and we could well do without Brussels, dealing direct and taking part in these international negotiations, as do so many other countries without need the EU to hold their hands.

All that, though, is detail. The real issue is independence – the right of a sovereign people to have their own government and their own legislature, which it can hold accountable for its actions. Without our own government, we have the status of slaves, and the universal cry of freedom has a resonance down the ages. That is, or should be, at the heart of the eurosceptic message.

That is a message you will not hear from the Beeb tonight, although you will hear about the risk of losing cheap flights – which are not so cheap any more, since the "colleagues" started loading taxes on them, with more to come. Should we keep our chains simply to enjoy the embrace of Ryanair – carbon allowances permitting? Tonight, we will not be asked.