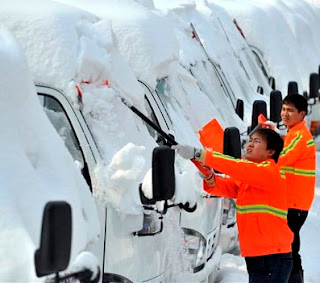 Assailed from all sides by warmist preachers seeking China's aid in reducing the scourge of global warming, the mayor of Shijiazhuang has taken the unusual step of apologising for the lack of response to the latest weather event.

This is the region's heaviest snows in six decades, which have left 38 dead and thousands stranded. Beijing is also getting in on the act, pledging funds to help people caught in the storms while Ai Wenli, mayor of the capital of Hebei province battered 22 inches of snow this week, said that he and other city officials would strive to provide better relief to the city of about 10 million.

"Close attention must be paid to changes in weather and improvements made in implementing response plans to protect people's lives and properties and minimize losses," the State Council said. "Authorities should place the work of protecting people’s livelihood, transportation and production in a prominent position."

Hebei, Shanxi and Henan provinces received the most snow in 60 years from 9-12 November, with the heaviest falls in a century in some areas. Storms on Thursday covered Beijing with six inches of snow, the city’s heaviest snowfall since weather data began in 1955. About 4.7 million people in seven provinces have been affected by the snowstorms, which have caused $513 million-worth of damage.

There is, nevertheless, absolutely no truth in the rumour that al Gore is flying out in his private jet for a photo-opportunity, and to gather further evidence for his next book on the perils of runaway global warming.

Nor indeed is there any likelihood of Louise Gray in The Daily Telegraph running a story about how six children in Hebei province were killed at two schools when accumulated snow caused cafeterias to collapse, or the student killed when a canteen at another school in Henan province also collapsed under the weight of snow.

Climate emergencies only exist when there are events which support claims of warming. Still, Barack Obama is due in the Beijing next week. He will sort it out – if the airport is still open.