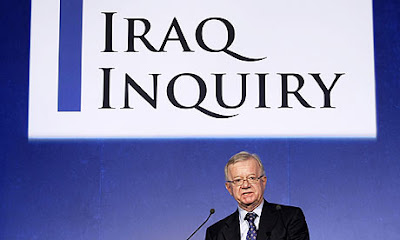 One does not always agree with Patrick Cockburn, who was one of the many journalists who covered the Iraqi war and occupation from the very start.

Like so many of his colleagues, he was transfixed by the greater drama and violence in the US sector. He thus took his eye off the ball, misreading what was going on in the south – mislead in part by the official disinformation which the British were churning out.

However, his "take" on the first day of the Chilcot inquiry seems spot on. It suggests, he writes, that British mandarins of the day had little more idea of the mechanics of Iraqi politics than the most rabid and jingoistic neo-cons in Washington.

What is so striking about the wars in Iraq and Afghanistan, he writes, is that the British foreign policy establishment seems to have lost its sense of what is dangerous and what is not. It may be that following dutifully behind the Americans is so ingrained that the capacity for independent judgement has atrophied. Cockburn adds:

In both Washington and Iraq before the invasion of 2003, there was a sense of British politicians and officials being slightly out of the loop. Perhaps this was inevitable once Mr Blair had promised to support the US regardless. But it is unfair and not very useful to blame Britain's misfortunes over Iraq all on him. It was British foreign policy-makers as a whole who seemed to forget the dangers of fighting wars in countries they had not taken the trouble to understand.

The accuracy of this is very evident from retrospective analysis. Even to this day, many official commentators believe that the insurgency in the South started to develop after the violence erupted in the US zone, and was in part triggered by it.

But before the British had even occupied Basra, the Shi'a were planning a take-over, first of the south and then of the whole country. First, in Basra, they conducted a merciless campaign of ethnic cleansing, driving out the Sunni – which the British did nothing to stop.

Then, under the leadership of Moqtada al-Sadr, the Mahdi Army fought first the rival militias and then, increasingly, the British, in an attempt to dominate the region.

Writes Cockburn, of the Inquiry , which heard from Sir William Patey, head of Middle East policy at the Foreign and Commonwealth Office at the time – plus two other mandarins - "At no time, going by their evidence, did British officials in 2003 realise that the invasion of Iraq meant revolutionary change in the region." As so many times before, these "Rolls-Royce minds" of the FCO have been vastly over-rated.

IRAQ THREAD
Posted by Richard at 00:43