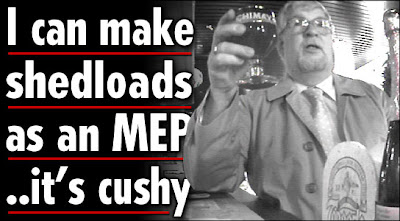 Tom Wise has been jailed for two years, according to The Times and others. That means he will do one year, less some, but the first two weeks are the hardest anyway. He also has to pay £30,000 towards prosecution costs - although he can pay that out of his generous EU pension.

It has to be said that the sentence is well-deserved. Had not Daniel Foggo picked it up, the fraud would have been much more extensive than the £39,000 he actually ripped off. But this was not just a matter of theft. It was an outright betrayal of rank-and-file UKIP members and the cause for which they stand, carried out, one has to say, with the knowledge (and tolerance) of other UKIP MEPs, who tried their best to cover up for him.

As Foggo wrote last Sunday, Wise remained a member of UKIP right up to this year, while an "internal inquiry" in UKIP under former leader Roger Knapman concluded that Wise's actions had been "honest and honourable throughout".

There is good evidence to suggest that Wise is far from being alone amongst UKIP MEPs in ripping off the system. Investigations are ongoing, which may lead to some more having their collars felt.

That there should be other politicians in the same boat is neither here nor there. We knew from the start that UKIP MEPs were going to be especially vulnerable to scrutiny from the authorities, so there was a special need to be whiter than white.

But not only was Tom Wise a thief, he was not even discrete - and then it took nearly four years to catch up with him. At least, though, he will now have plenty of time to reflect on his sins.