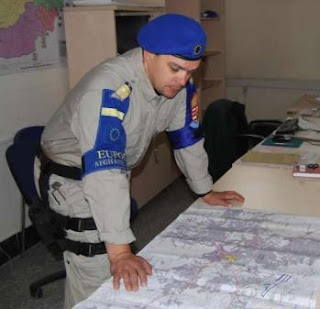 It would not have been the first time we have observed that the EU is very strident about other people – like member states – "respecting" their obligations, but whenever the boot is on the other foot, it invariably goes AWOL.

The latest evidence of that propensity comes from the New York Times, which is rather pointedly telling us: "EU Mission to Train Afghan Police in Disarray".

Two-and-a-half years after our beloved Empire took over the responsibility for managing it from Germany, the EU's police training mission in Afghanistan is still understaffed, lacks security and transport, and has yet to develop a uniform training program.

That is according to the diplomats and security experts involved in the mission and, we are told, "the failure in setting up the 400-person mission could be a fatal flaw as several European countries fighting there are linking a withdrawal date with the ability of the Afghan Army and police forces to take over responsibility for security."

One of the most voluble critics is Piotr Krawczyk, a security expert at the Polish Institute of International Affairs and former deputy head of the Polish Embassy in Kabul. He condemns the mission a "a logistical nightmare," claiming that there is a "complete lack of coordination between the EU institutions in Afghanistan and between the other big players, including the United Nations and NATO."

So dire has the situation become that Nato is now to start its own police training program which, needless to say, will be financed by the United States. Combined with training the Afghan Army, the US government will provide $10 billion in 2010. By comparison, the EU's budget for this year is €64 million, or $95 million.

Those with longer memories will recall that EU member states originally committed to providing 400 trainers and personnel, something foreign ministers of the EU member states in have just admitted they have failed to do. Even the Frau Merkel has failed to step up to the plate, promising to send 120 police officers and civilian experts this year. So far, she has sent 46.

"The bottom line is that there is a lack of political will among the member states and a lack of security on the ground for the EU to do the job properly," said Kees Homan, an Afghanistan expert at Clingendael, the Netherlands Institute of International Relations.

And now we get a joint letter from Solana and foreign minister Carl Bildt of Sweden, holds the EU's rotating presidency, sent to all EU foreign, defence and interior ministers. "Delivering on our political commitments is a matter of EU credibility vis-à-vis the Afghan government and the entire international community," they write.

Well, they said it, not us. But, when it comes to credibility stakes, one of their problems comes under the "you couldn't make it up" category. A core reason why the "colleagues" are so reluctant to commit the little pink bodies of their "EU police officers" to the theatre is that they have no guaranteed protection from Nato if they come under fire.

This, would you beleive, is because Turkey - a Nato member and sometime candidate to join the EU - and Greece, also a member of Nato and already in the EU, have been blocking a security accord which would allow Nato to provide military assistance. So the "colleagues" sit at home and dream their dreams of Empire.

And this lot thinks they are going to rule the world?