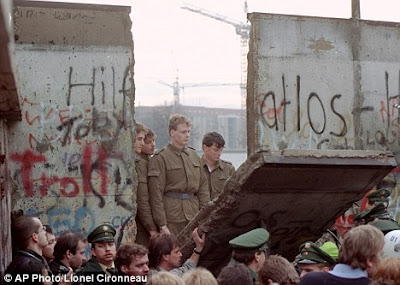 Twenty eight years and 91 days, the Berlin Wall lasted. But today, on the 20th anniversary of its fall, we are but days away from the erection of a new wall, with the coming into force of the Lisbon Treaty on 1 December.

The most difficult thing we confront is the fact that the wall is invisible – it exists in the "hearts and minds" of our rulers, who have erected near-impenetrable barriers between themselves and the peoples of Europe, pretending to represent them but representing only themselves.

Their new European empire thus makes each individual member state an occupied country. We are ruled by an alien power based in Brussels, which has never gained the assent of the peoples and which has never sought a legitimate mandate.

As the resistance movement grows, we will bring it down. And it will not take twenty eight years and 91 days to bring about that happy event.