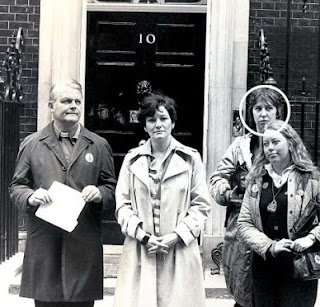 It seems that Baroness Ashton (pictured), our newly appointed EU high representative, is in a little spot of bother. Not only was she the national treasurer of the CND in the early 1980s, It has emerged that she represented the organisation at Communist Party meetings, including one in Oldham in September 1977, at a time when MI5 was carrying out surveillance on its members.

Also – and highly embarrassing for the newly-crowned head of EU foreign affairs - one of the leaflets brought out during her time with CND shows the organisation was a staunch opponent of European integration. It said: "The trouble with the Common Market is that it brings closer together the well-armed Nato countries and thus worsens the divisions of Europe."

The story is covered by The Times which has the lady having to deny another sin - taking funds from the Soviet Union during her days as treasurer.

In keeping with the liberal milieu of the European Union though, the person really in bother is the one who brought this up – none other than Nigel Farage. He raised the matter on the floor of the EU parliament yesterday, asking Barroso to investigate whether Ashton had received money "from enemies of the West".

This, earned him a summons to see Jerzy Buzek, the parliament's president, who declared that Farage's remarks were "... improper to the whole situation". He is, we are informed, to be told to "restrain his language and refrain from making improper comments in the chamber" or face disciplinary action.

This notwithstanding, Farage's substantive point is that Ashton was treasurer during a period when CND took very large donations and refused to reveal the sources. "What is known," he says, "is that these donations were obtained by a man named Will Howard who was a member of the Communist Party in Great Britain."

Thus Farage wanted to know whether Ashton would deny that while she had been treasurer, she had taken funds from organisations opposed to Western-style democracy. "Are we really happy that somebody who will be in charge of our overseas security policy was an activist in an outfit like CND? I do not think she is a fit and proper person to do this job," he told the assembled "colleagues".

Ashton's spokesman denied that she had either had contact with the Soviet Union or had accepted money from Soviet sources, a denial that did not altogether convince Krisjanis Karins, a centre-right Latvian MEP. He claims that information has been published that she was involved in this Marxist movement.

Hynek Fajnon, an MEP for the Czech centre-right party ODS, is also unhappy. "There is no doubt that the Kremlin supported CND activities," he says. "If Mrs Ashton as treasurer had played any role in that, it would be a great scandal."

This is not the last time Ashton will hear of this because she has to face questions about the issue next week when she appears before EU parliament's foreign affairs committee next week.

However, she will doubtless shrug off any suggestion that this makes her unfit for the job. Alternatively, she could argue that Communist sympathies makes her an admirable post–holder for a senior EU position, although one suspects that she will not be too keen to argue that point.