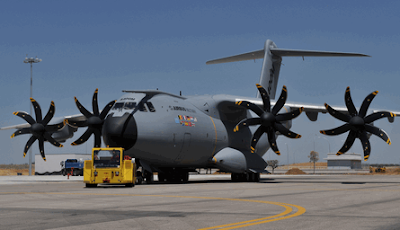 Belatedly picked up from Reuters is news of the South African Air Force cancelling its $5.2 billion contract to buy eight Airbus A400M transports.

Government spokesman Themba Maseko cites rising costs and delivery delays, while defence minister Lindiwe Sisulu says: "We have terminated the contract with Airbus but we've not terminated our quest to ensure we have the necessary capabilities. That is very clear."

Odds are the SAAF will be looking to Lockheed Martin and the C-130J for its "capabilities", knocking another hole in this symbol of European unity and "know-how".

Already (at least) three years late, we have had no further news of the aircraft's first flight, even though Airbus promised it would fly by the end of this year or in the first weeks of 2010. Yet, in December, participating governments are finally to decide whether to go ahead with the aircraft.

If the British government had any sense, it would be following in the footsteps of the South Africans.